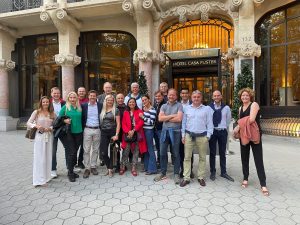 After going through the worst crisis since World War II* and not being able to travel or hold the usual and regular meetings that IESF (International Executive Search Federation) members hold at least twice a year (every six months), it has been possible to organize and enjoy a new Annual Global Meeting (AGM) in Barcelona, after postponing the meeting scheduled in Shanghai, China for two consecutive years due to restrictive measures on travel, tickets and meetings.

This year, the meeting started on Monday, October 4, and concluded on October 7. During these days, 22 countries participated. Most of them were present in person, and some, due to COVID restrictions in their respective countries, participated online. We had the great privilege of having partners from France, Belgium, Italy, Germany, Switzerland, Poland, Romania, Denmark, Norway, Netherlands, Israel, Turkey, Mexico, Peru, Panama, Chile, United States, Canada, Singapore, China, India and of course Spain.

Being firms with high added value and considered “boutiques” in each of their territories, positioned as firms to be taken into account if you want to search, select, evaluate and recruit executive profiles, different topics of high interest for clients, candidates and always with a focus on continuous improvement were discussed.

This year has been special, it has been a long awaited meeting after the 2020 AGM in digital format (zoom), and an extraordinary event has been organized, where members have been able to visit the largest and most prestigious museum in the world of Formula 1 and MotoGP, as well as one of the most important collections of rally cars in the world, all in the facilities of the prestigious sports car brand McLaren.

The members were not only able to enjoy this wonderful visit guided by the owner and founder Eduardo Costabal, but also had the opportunity to drive different McLaren sports cars on the wonderful roads near Sitges (Barcelona).

One of the most relevant aspects was the change of Presidency, where Victor Carulla who initiated was appointed President of IESF by unanimous vote of the members at the AGM held in Sydney (Australia) in September 2017, and where he started his mandate one year later in Lyon (France) in September 2018. There he presented his plan for the next three years (2018-2021) where he outlined improvements in management, transparency, improved tools, greater visibility, and greater geographic presence. After the three years, not only were the aspects presented fulfilled, but each year new successes and great improvements were added, ending his term as probably the best presidential term in the history of IESF by the youngest President.

He will be succeeded by Gertjan van de Groep, member from the Netherlands, treasurer for the last three years of IESF and active member of the Leadership Council Team, and we are sure that his term will be impeccable and very beneficial for the organization.

The experience of all attendees has been unbeatable and all returned to their home countries with great topics to discuss to continue their growth and continue to improve every day to continue providing a better service that is above the rest in many aspects.

The next meetings will take place in Copenhagen (Denmark) in April 2022, and in Shanghai (China) in September 2022.

(*) UN Secretary-General António Guterres on Tuesday called for the socio-economic impact of the coronavirus pandemic to be met with a “large-scale multilateral response” representing at least 10% of global GDP, in a crisis that Guterres says is “the worst crisis since World War II”.